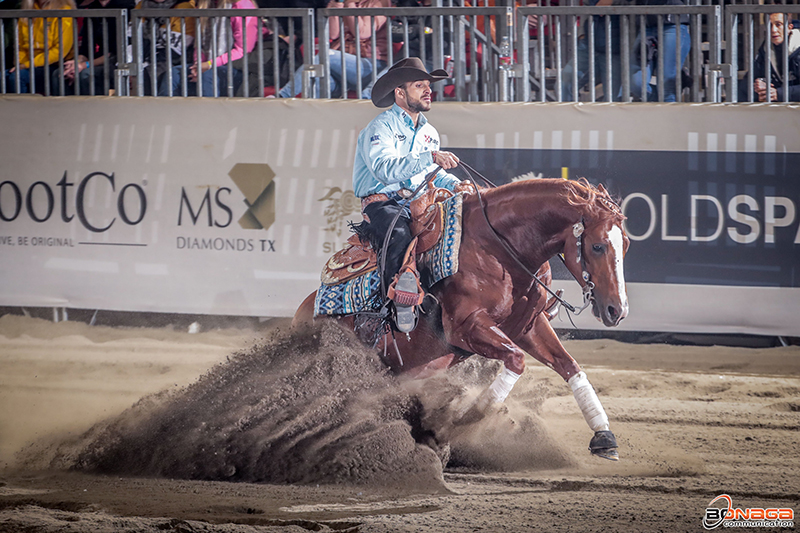 21/11/2021 – The best performing combination of the preliminaries of the IRHA Open Futurity for 3-years-old, Lukasz Czechowicz (POL) and CSG Wisemanfear [Colonels Shining Gun] owned by Katarzyna Roleska, was saved for the last in the finals concluded yesterday in Cremona (ITA) and the expectations were high. Leading with a 223,0 was Spark Made Whiz [Spark N Whiz] owned by Luga Quarter Horses and ridden by Mirko Midili (ITA). With a 221,5 second place of the rankings was taken by Frozen Natrashya [Gunnatrashya] owned by Angelucci Quarter Horses and ridden by Midili as well. Czechowicz opened good with a clean run-in and back up. The spins were promising. The stallion went deep, but unfortunately too deep to keep his balance and the horse sat down. Despite the 0-score Czechowicz got a standing ovation leaving the arena. Though it was no more than a plaster on the wound, it was an expression of great respect. Both the L4 title and L4 reserve title were for Midili. A beautiful victory of course, but with no doubt Midili would have rather seen Czechowicz concluding his pattern the way it should have been. That is what the competition is intended for.
The Belgian NRHA Million Dollar Riders Bernard and Ann Fonck did not live up to the expectations in these finals. Bernard and JJ Roosters Olaf [Ricochet Rooster] owned by Anthony Cianci posted a 216,0, placing 8th and Ann and PL Miss Gotta Whiz [Spooks Gotta Whiz] owned by Lenka Lukackova a 207,5, placing 18th.
Posting a 221,0 Giacomo Ronchi (ITA) piloted Letters To Juliet [Master Snapper] owned by Ronchi and Impresa Agricola Cuoghi to the L3 title. Both L3 reserve honors and the L2 title were for SQ Magnetic Dreamer [Chic Magnetic] owned by Marco Martinelli and ridden by Francesco Barbagli (ITA) posting a 217,5. Posting a 216,0, L2 reserve honors went to Xtra Doo Little [Shiners Voodoo Dr] owned by Katharina Schwarz and risen by Stephan Rhode (GER). In L1 Tommaso Beltramini (ITA) piloted Steppin To Amarillo [Stepping On Sparks] owned by Riccardo Abati to the title posting a 215,5. There was a tie for reserve honors. Both Piccola Sparkya [ARC Gunna Sparkya] owned by Niccolo Azzarone and Golden Sparkya [ARC Gunna Sparkya] owned by Rabboni Reining Horses posted a 214,5 with Fabio Russo (ITA) in the saddle.