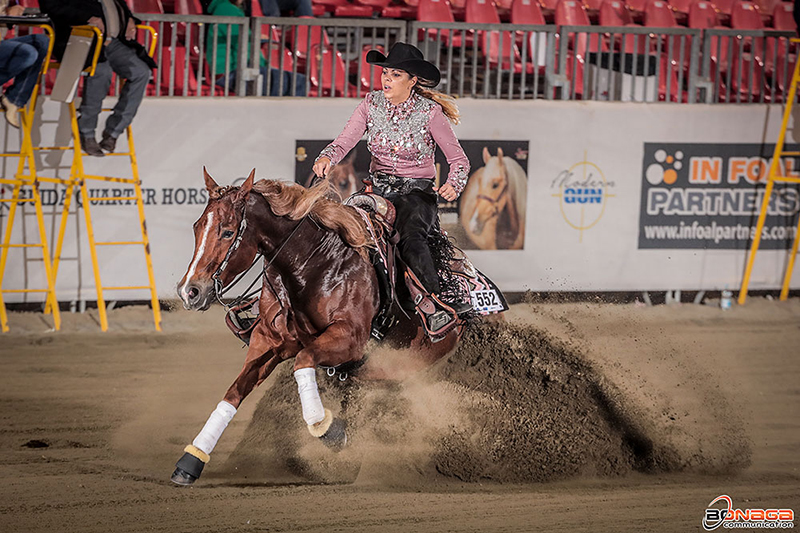 12/11/2021 – The finalists of the Open NRHA European Futurity for 4-year-old horses have been announce. In the preliminaries scheduled for yesterday Cira Baeck (BEL) and Americasnextcovrgirl [Walla Walla Whiz] owned by Maria Cecilia Fiorucci posted a 220,5, taking the lead in L4. Earlier this season Baeck and this mare claimed the L4 Open title at the NRHA Belgium Futurity posting a 224,5. It is not very common to see Baeck riding a mare, but in the preliminaries this fact was emphasized by the pink outfit. 21 Entries made it back to the L4 finals, among them Ann and Bernard Fonck (BEL) and Kris Hermus (NLD). With Miss Maggie Brown [Magnum Chic Dream] owned by Kyra te Paske Hermus posted a 216,0 advancing to the L3- (15 finalists) and L2 (21) finals as well.
Taking the lead in L3 were Manuel Cortesi (ITA) with PC Sliderina One [One Gun] owned by Azienda Agricola Cortesi Piero and Lena-Marie Maas GER) with Arnels Spat Olena [Spat Olena] owned by Sabrina Adam, both marking a 219,0. Maas also took the lead in L2 and L1. The NRHA Euro preliminaries were scheduled concurrent with both the preliminaries of the IRHA Open L4- and L2 Futurity for 4-year-old and the finals of the AIQH L4- and L2 Open Futurity for 4-year-old horses. Baeck took the lead in the IRHA L4- and Maas in the L2 division. The AIQH L4 Open class featured only 1 entry: Adriano Meacci (ITA) and TC Lucifer 66 [Inferno Sixty Six] owned by Slide Or Die LLC. Posting a 211,5. Meacci claimed both the L4- and L2 (4 entries) title.
Both the Euro Futurity- and IRHA Futurity finals are concurrently scheduled for Saturday.
Live streaming is been taken care of by Bonaga Communication.