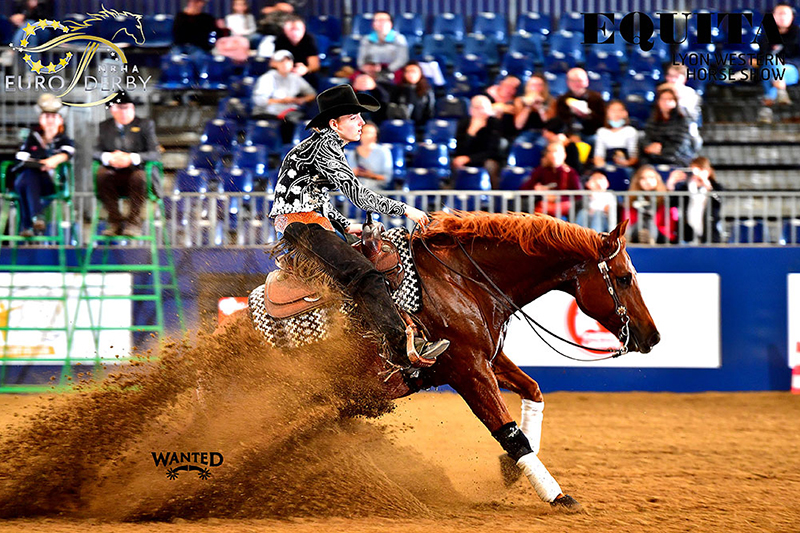 01/11/2021 – The NRHA European Derby scheduled in conjunction with Equitá Lyon (FRA) has been concluded yesterday with the Non Pro finals counting 29 entries in total. Being the first to enter Jürgen Pritz (AUT) set the L4 (19 finalists) bar with 8-year-old mare Rose Of Mercedes [Cromed Out Mercedes] at 214,0. Being the second entry, Dries Verschueren and the 8-year-old gelding [Missedouttinseltown [Hollywoodstinseltown] raised the bar to 215,0 and later on in the competition with the 6-year-old mare Smart Little Ruffle [Smart Spook] to 215,5. But in the end it was Fabio de Iulio (IT) and the 5-year-old stallion RS Cronos Jac [RS Great Jac Feona] who claimed the title by posting a 218,5. There was a tie for reserve honors between Verschueren and Alex Kubli (SUI) with the 8-year-old stallion Gunna Ruf Ya [Gunnatrashya] both having marked a 215,5.
The 215,0 was the point of departure for 3-way run off for the L3 title (19) between Verschueren, Kubli and Youth rider Sara Karasova (CZE) with the 6-year-old gelding KH Yankee Step [Rowdy Yankee]. The run-off was decided in favor of Karasova. Karasova did not only claim the L3-, but also the L2-, L1 and Youth Derby Champion title. Verschueren and Kubli tied for reserve honors in L3. With a 214,0 there was a 3-way tie for reserve honors in L2 (1() between Pritz, Bo Brutsaert (BEL) and the 5-year-old mare KB CJ Gun [CJ Whiz] and George Sternberg Allen (GBR) with the 8-year-old gelding Colonel Chic Dream [Magnum Chic Dream]. In L1 Sternberg Allen too reserve honors.
The reserve title in the Youth division (4) went to Thea Karasova and the 5-year-old gelding Playin For Big Guns [Tinseltownsmokingun] marking 1 213,0. Third step on the podium was for Pauline Engel (DE) and the 7-year-old mare Gumpatrashya [Gunnatrashya] marking a 212,0.
There was a tie for the APHA L4 Non Pro Derby Champion title, scheduled concurrent with the NRHA Derby finals. Both Stephanie Blessing (SUI) and the 5-year-old mare Dance Gotta Gun [Spooks Gotta Gun] and Markus Spreitzhofer (UAT) and the 8-year-old gelding Cant Hide A Gun [The Big Gun] marked a 213,0.
The dust from Lyon is now blowing in the direction of Cremo (ITA) where the NRHA European Futurity for 4-year-old horses are scheduled for November 11 up to end including November 20 in conjunction with the IRHA Futurity for 3- and four-year-old horses.