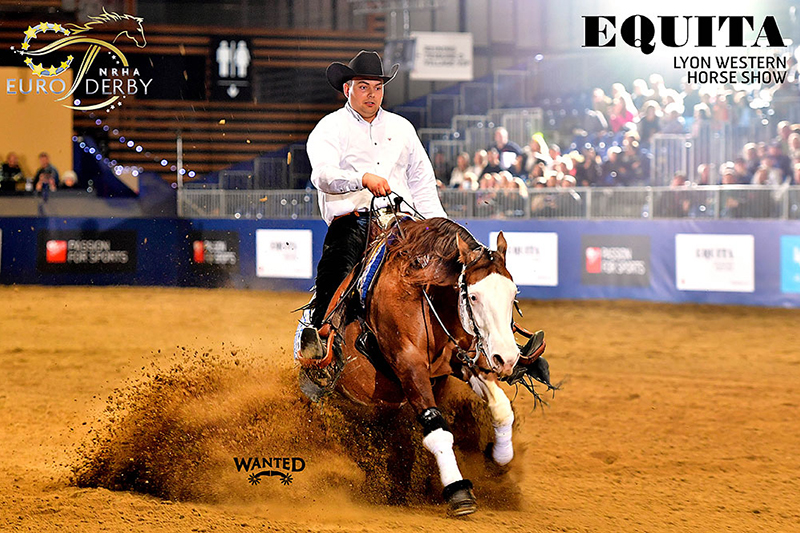 31/10/2021 – Both beautiful- and powerful performances came along in the finals of the NRHA Open European Derby concluded yesterday in Lyon (FRA). Being the first entry in the second section Cira Baeck (BEL) and the 8-year-old stallion Phantom Face [Pale Face Dunnit] owned by Maria Cecilia Fiorucci raised the bar to a 224,5, taking the leading position in L4. With 5 more entries to go Mirko Midili (ITA) and the 7-year-old stallion Maytheforcebewhizyou [Spooks Gotta Whiz] owned by Alberto Capello] raised the bar to 227,0. But the game was not over yet. With 2 more entries to go Lukasz Czechowicz (POL) and the 5-year-old gelding Frozen Shining Gun [Colonels Shining Gun] owned by Katarzyna Roleska made the difference. The overall picture looked beautiful and relaxed, but there was definitely the utmost concentration. Czechowicz hit the penalty box light performing the spins, but more than made up for that in the circles, the stops and perfect rollbacks, resulting in a 227,5 and the L4 Open Derby Champion title. Reserve honors were for Maytheforcebewhizyou and Midili; 3rd place for Phantom Face and Baeck. Apart from that, Maytheforcebewhizyou and Midili claimed the title in the APHA L4 Open Derby finals, scheduled class in class with the NRHA Open Derby finals. Reserve honors were for Phantom Face and Baeck.
Posting a 222,0 the title in both L3 and L2 went to the 8-year old gelding Four Season Whiz [Topsail Whiz] ridden by Sebastiano Valtorta (IT) and owned by Luca Mauri. The co-Reserve Champion title went to the 6-year-old stallion AJ Commander Dun Gun [Colonels Shining Gun] owned by Bruno Costantini and ridden by Matyas Gobert (BEL) and the 6-year-old mare Spooks Gotta Deal [Spooks Gotta Gun] ridden by Markus Gebert (GER) and owned by Lisa Schlatter, both marking a 220,5.
In L1 it were Lena-Marie Maas (GER and the 6-year-old mare Gunnersbabe [Gunner] owned by Bartolomeo Rubino claiming the title by posting a 217,5. The co-Reserve Champion title went to the 5-year-old stallion Sweet Big Gun [Big Chic Gun] owned by Simone Quaeck and ridden by Julia Stֶädele (GER) and the 7-year-old stallion Missing Spook [Smart Spook] owned by Mayla Sollima and ridden by Andrea Visigalli (IT), both marking a 213,5.