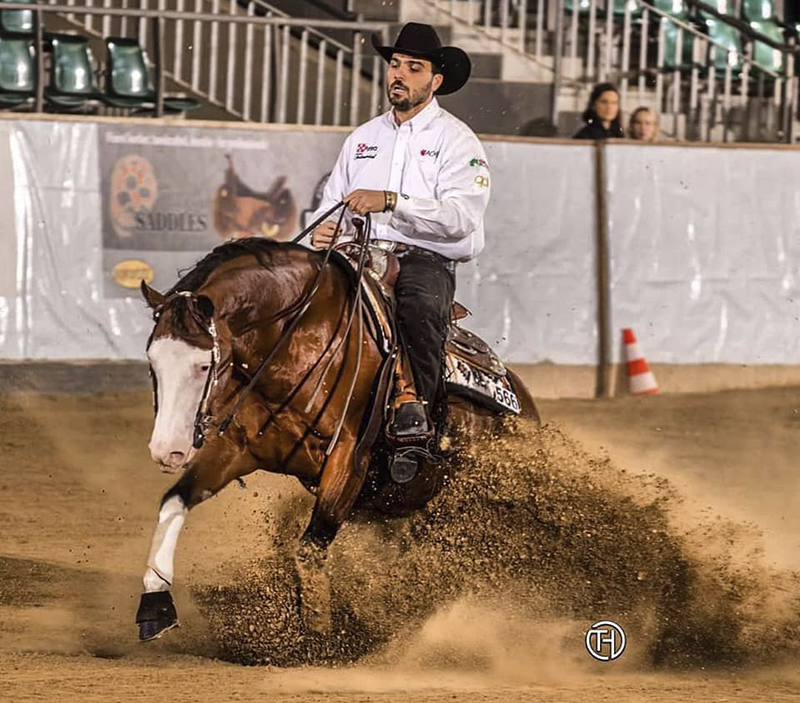 25/10/2021 – In 2004 the by now 37-year-old Italian Gennaro Lendi put the first NRHA dollars to his name by winning the ancillary Non Pro class at the IRHA Derby aboard the 6-year-old Appaloosa gelding OT Taris High [Taris Valentine x High Time Boogie]. At the NRHA Germany Breeders Futurity scheduled for last week in Rieden-Kreuth (GER) Lendi reached the milestone of $ 1 million in NRHA earnings. It was his performance with the mare OT Taris Yankee [Yankee Gun x OT Tarisme] owned by Cornelia Valentin in the finals of the € 29.260 added L4 Open class for 4-year-old horses that pulled him over the magic border. Posting a 221,0 Lendi tied for 3rd place. Earlier in the competition he had already marked a 221,0 with the gelding OT Dont Miss To Wish [Dont Miss My Guns x OT Taris Wish Miss] owned by Domenico Giannitti.
Lendi is the fifth European (on European soil) reaching this milestone. Rudi Kronsteiner (AUT) was the very first in 2011, Bernard Fonck (BEL) followed in 2012, Cira Baeck (BEL) in 2018 and Ann Fonck (BEL) in 2019. Worldwide there are only 34 riders who have earned this status.