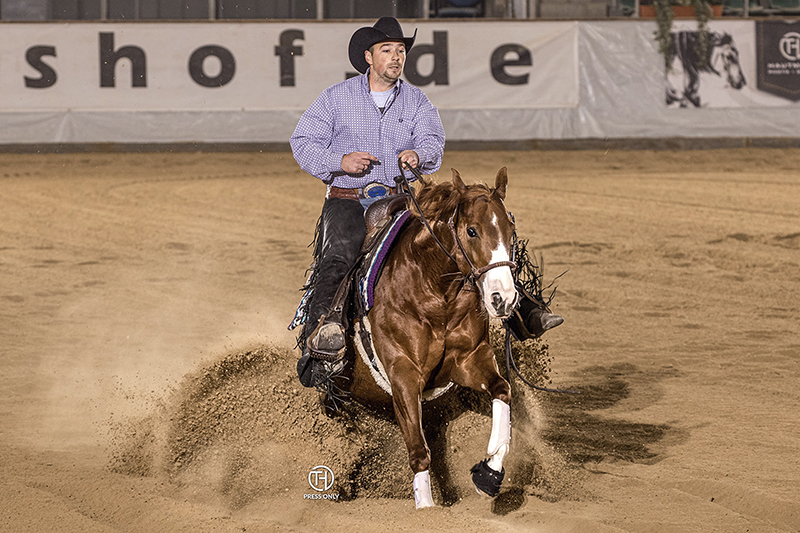 10/10/2021 – The last classes of the NRHA Germany Breeders Derby 2021 have been  concluded yesterday in the Ostbayernhalle in Rieden-Kreuth (GER). The were the Open finals counting 40 entries in total, of which 15 in L1, 23 in L2, 15 in L3 and 15 in L4.
Marking a 215,0 Sven Bösl (GER piloted the 8-year-old stallion HP Big Chex To Gun [Big Chex To Cash] owned by Katrin Guglhör to the L1 Open Derby Champion title. Patrick Göschl (GER) and the 6-year-old stallion The Gun Maker [One Gun] owned by Alexandra Bausch claimed reserve honors marking a 214,5.
The big winner In L2 is called Alexander Ripper (DE). With a 217,0 the class ended in a tie for first place. A run-off was out of order though because both of the 217,0 scores were marked by Ripper aboard the 11-year-old stallion Bay Gunner [Colonels Smoking Gun] owned by Wolfgang Müller and the 7-year-old mare RHMSpooksgottanumask [Spooks Gotta Whiz] owned by Felisette van Wieren.
Posting a 223,5 Markus Gebert (AUT) piloted the 6-year-old mare Spooks Gotta Deal [Spooks Gotta Gun] owned by Lisa Schlatter to both the L3- and L4 Open Derby Champion title. It is not quite common to show a horse on a bosal at such a prestigious event but Gebert did it with success. Reserve honors in L3 were for the 4-year-old stallion Spotlight Charly [As Smart As Charley] owned by Susanne Schöning and ridden by Markus Süchting (GER); the pair marked a 219,0. Marking a 222,0 Grischa Ludwig (GER) piloted the 5-year-old stallion Spooks Of Genius [Spooks Gotta Whiz] owned by Dutch Margot van Doorne to the L4 Open Derby Reserve Champion title.
Petra van Ede (NLD) was the only Dutch finalist. With her own 5-year-old gelding Gonnashowya [Gunnatrashya] Van Ede posted a 215,0 placing 9th in L4, 8th in L3 and tying for 3rd place in L2. With the 7-year-old mare Cee U In Tinseltown [Hollywoodstinseltown], owned by Gisela Haas, Van Ede did not live up to the expectations. Marking a 211,5 the pair placed 13th in L2.