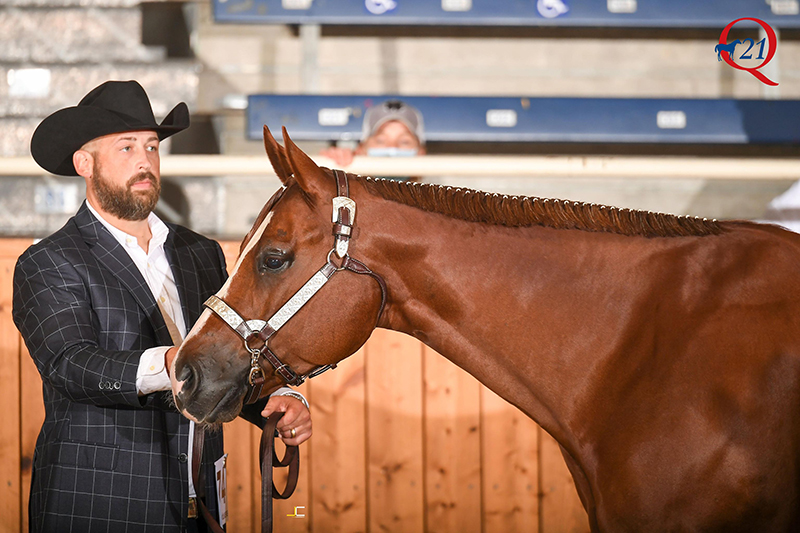 02/10/2021 – Q21, the International German Championship for Quarter Horses, kicked off yesterday in Aachen (GER) with the Halter classes for mares and geldings. The kick off was especially surprisingly in the Gelding category. The Dutch national hymn -het Wilhelmus- was played for an American native who set foot in the European show arena for the second time in his life. The first time was 6 years ago in Rieden-Kreuth (GER), not in a Halter class though, but in a Hope class proposing the marriage to Marjolijn Spaans. The wholeheartedly ‘Yes’ was quite a moment.
We are talking about Patrick Gray. For the first time ever in his life Gray entered a show, inspired by Marjolijn who has rarely hit the show grounds since her marriage but is back again in Aachen. Marjolijn more than earned her reputation -both national and international- in the show arena and a comeback is more than welcome.
Gray entered the 6-year-old gelding Dew Not Touch [A Touch Of Sudden], owned by Marjolijn, in both the Open- and Amateur Performance Halter Geldings class and claimed in both categories the title. The horse and handler were also crowned once Reserve Champion Gelding Open and once Grand Champion Gelding Amateur. Dew Not Touch hit the Dutch soil in 2021 and has his home at the premises of the Grays. In less than a year Marjolijn passed her knowledge and showmanship skills to her husband just fine. Team spirit!
Visit www.dqha.de for additional information.