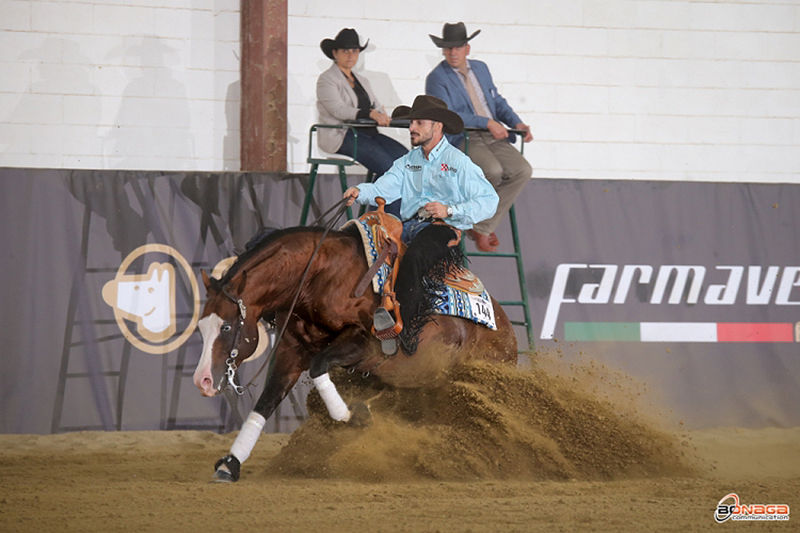 26/09/2021 – The finals of the € 65.000 added IRHA Open Maturity concluded yesterday at Tenuta Elementa in Bracciano (IT) were especially exciting in L4. With 6 entries to go Mirko Midili and the 7-year-old stallion Maytheforcebewhizyou [Spooks Gotta Whiz] owned by Alberto Capello came up with a surprise. The score to beat was a 219,5 posted by Cira Baeck (BEL) and the 6-year-old stallion Gunna Be A Big Hit [Gunnatrashya] owned by Maria Cecilia Fiorucci. Midili lived up to the expectations and set the bar at 226,0 with a beautiful performance. Being the second last to enter Nico Sicuro and the 7-year-old stallion Colonels Dancing Gun [Gunner] owned by Quarter Dream SRL came close. Sicuro hit the penalty box in the spins, but the effort on the circles was far more than average. In the stops and rollbacks the combination lacked the power needed resulting in a 223,5. It was to be expected that Cira Baeck and the 8-year-old stallion Phantom Face [Pale Face Dunnit] owned – being the last to enter – would give her best. She definitely did but unfortunately hit the penalty box hard. On the circles, stops and rollbacks this fault was compensated for fine but in the last stop the power was gone, resulting in a 223,0. The title was for Midili, Sicuro took reserve honors and Baeck placed 3rd.
Posting a 221,0 Sebastiano Valtorta and the 7-year-old gelding Four Season Whiz [Topsail Whiz] owned by Luca Mauri claimed the L3 title. Reserve honors went to the 6-year-old mare Gunnersbabe [Gunner] owned by Bartolomeo Rubino and ridden by Lena-Marie Maas (GER) posting a 216,5. The 5-year-old mare FB Topsail Shine [Shine Chic Shine] owned by Claudia Rizzola and ridden by Cerutti placed 3 posting a 215,5. The L2 podium was the same.
In L1 Maas claimed the title. Posting a 215,5 Elio Simonini and the 9-year-old gelding Sevenchextocash [Big Chex To Cash] owned by Susanna Sodi took reserve honors Posting a 214,5 Perrine Prevost (FRA) the 5-year-old stallion Made In Jersey [Yellow Jersey] owned by Fiorucci placed  3rd.
Dutch Pia Boonstoppel felt the excitement advancing to the finals of her first ‘big’ show. With the 6-year-old stallion KN Made My Whiz [Hesa Mega Whiz] Boonstoppel posted a 211,0 placing 10th in L2 and 6th in L1. With the 6-year-old stallion Dun For The Nite [Gunners Special Nite] she faced a break of gate resulting in a 208,0 and 9th place in L1. Both horses are owned by Fiorucci.