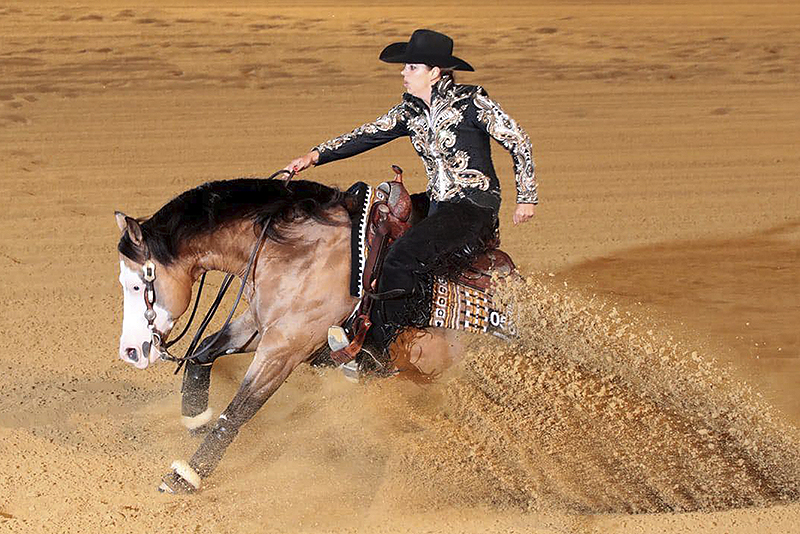 11/09/2021 – The final of the € 40000 Added NRHA Open class concluded yesterday at Americana in Augsburg (GER), counting 18 entries in total, was one of great class. The competition was opened by Grischa Ludwig (GER) with the 5-year-old stallion West Coast Trash [Gunnatrashya] owned by Margot van Doorne. Despite the fact that the penalty box was hit several times, Ludwig set the opening score at 217,5. Being the 4th to enter Ann Fonck (BEL) and the 5-year-old gelding Shines Like Spook [Smart Spook] owned by Rosanne Sternberg raised the bar with a beautiful performance to a 223,0. Being entry number 11, Cira Baeck (BEL) and the 8-year-old stallion Phantom Face [Pale Face Dunnit] owned by Maria Cecilia Fiorucci jumped the bar stylish, despite of a minor penalty on the first set of spins. It is to regret that the combination lost some of the performing power in the 2nd stop and rollback, but the bar was raised to a 224,0. With just 2 more entries to go, Bernard Fonck (BEL) and the 6-year-old gelding Spook Sunburst [Great Sun Burst] owned by 7 Heaven Reining Horses brought back the excitement in the field with mostly powerful executed spins, score 223,0. The last finalist to enter, Nico Sicuro and the 7-year-old stallion Colonels Dancing Gun [Gunner] owned by Quarter Dream SRL, made the difference, specifically in the stops and rollbacks, being rewarded with the winning 225,5 score.
Sicuro Open Champion and Baeck Open Reserve Champion. Ann and Bernard had to fit in on the third step of the podium, but after years of practicing together that did not seem to be a problem.
The complete results can be viewed here.