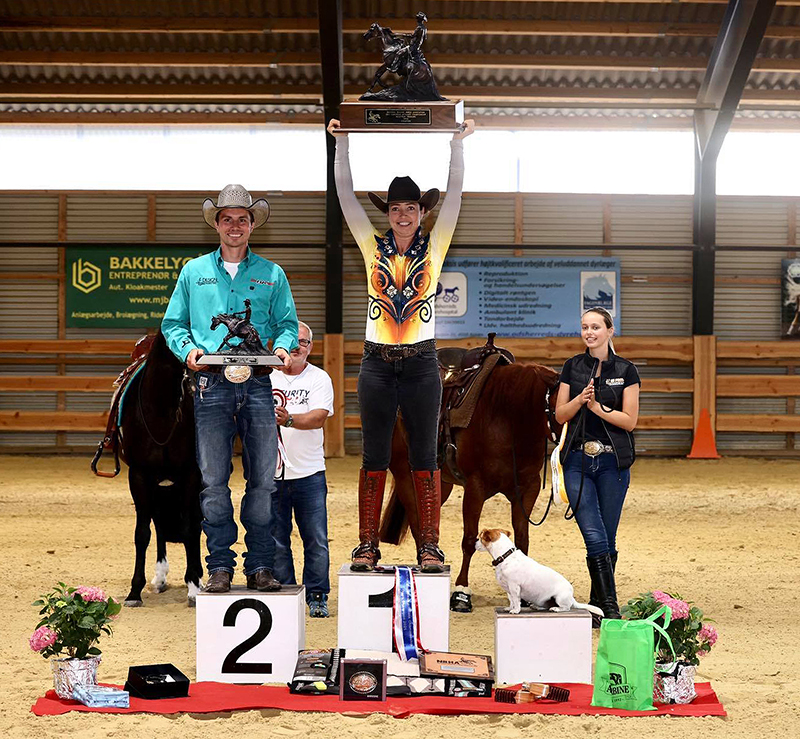 02/08/2021 – The NRHA European Affiliate Championship 2021 (EAC) scheduled at the Tuse Creek Ranch in Regstrup (DK) was concluded with the Open class. With only 8 entries not a big class but therefore not less exciting. Belgian title holder Ann Fonck opened the class with the 7-year-old mare Gunners Specialolena [Gunners Special Nite] owned by Diego Dalla Gassa and put the bar at 220,0. It’s to Fonck’s credit that she preferred entering the EAC above entering the Italian Derby that was run concurrent in Cremona (ITA). A more than friendly choice.
Being the 5th combination to enter, Austrian Klaus Lechner and the 16-year-old stallion Cody Rooster Delmaso [Ricochet Rooster] owned by Julia Gaupmann was ready for the challenge. Lechner was definitely not inferior to Fonck. He performed well and finished the pattern with a fantastic executed sliding stop resulting in a 222,0 score.
Ann had another ace in the hand though: the 5-year-old gelding Shines Like Spook [Smart Spook] owned by Rosanne Sternberg. Being the last to enter, Ann was determined. The spins were impressive and the rest of the maneuvers not without risk. The effort was rewarded with a 223,5 score and the title. Reserve honors were for Cody Rooster Delmaso and Lechner, 3rd step of the podium for Gunners Specialolena and Fonck.