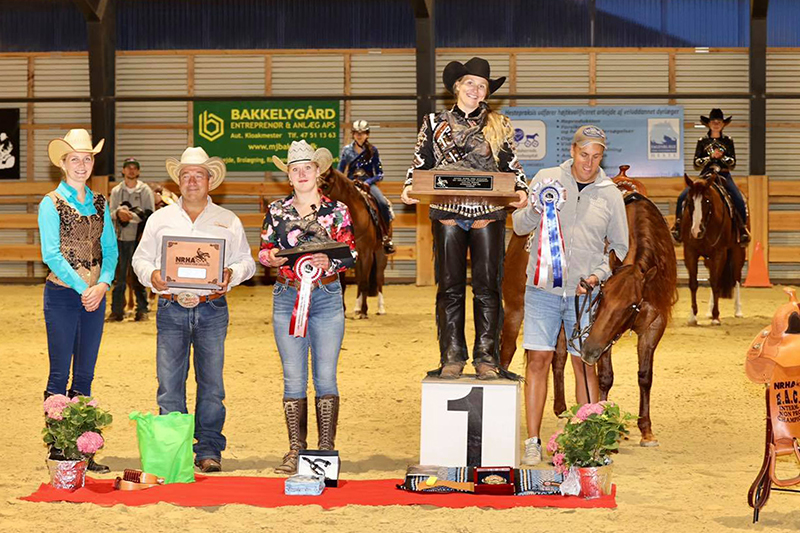 30/07/2021 – For a long time the NRHA EAC Intermediate Non Pro Champion title was at hand for Belgium Piet Mestdagh competing at the NRHA European Affiliate Championship in Regstrup (DEN). 25 Combinations entered the class which was concluded yesterday. Being entry number 7, Mestdagh and his 10-year-old mare Gunners Snappy Chic [Gunner] took the lead posting a 216,5. After a while Swedish Sara Nordin and her 9-year-old gelding Chex Little Legend [Custom Legend] came alongside. Both riders stayed in the lead until the very last entry, being Norwegian Anniken Nystrøm Holth with her 4-year-old mare Eineyswhiz [Einsteins Revolution]. Nystrøm Holth stayed out of the penalty box and by performing far above average, the pair marked a 218,5 taking the lead and claiming the title. Mestdagh and Nordin settled for the co-Reserve Champion title. With his 14-year-old stallion Reining Whiz [Topsail Whiz] Mestdagh posted a 214,0 placing 8th. Dutch Leonoor de Bruin and the 13-year-old stallion Crome Dont Corrode [Custom Crome] and Belgian Steve Vannietvelt and the 13-year old stallion What A Wave [Tidal Wave Jac] both marked a 212,5 tying for 10th place.